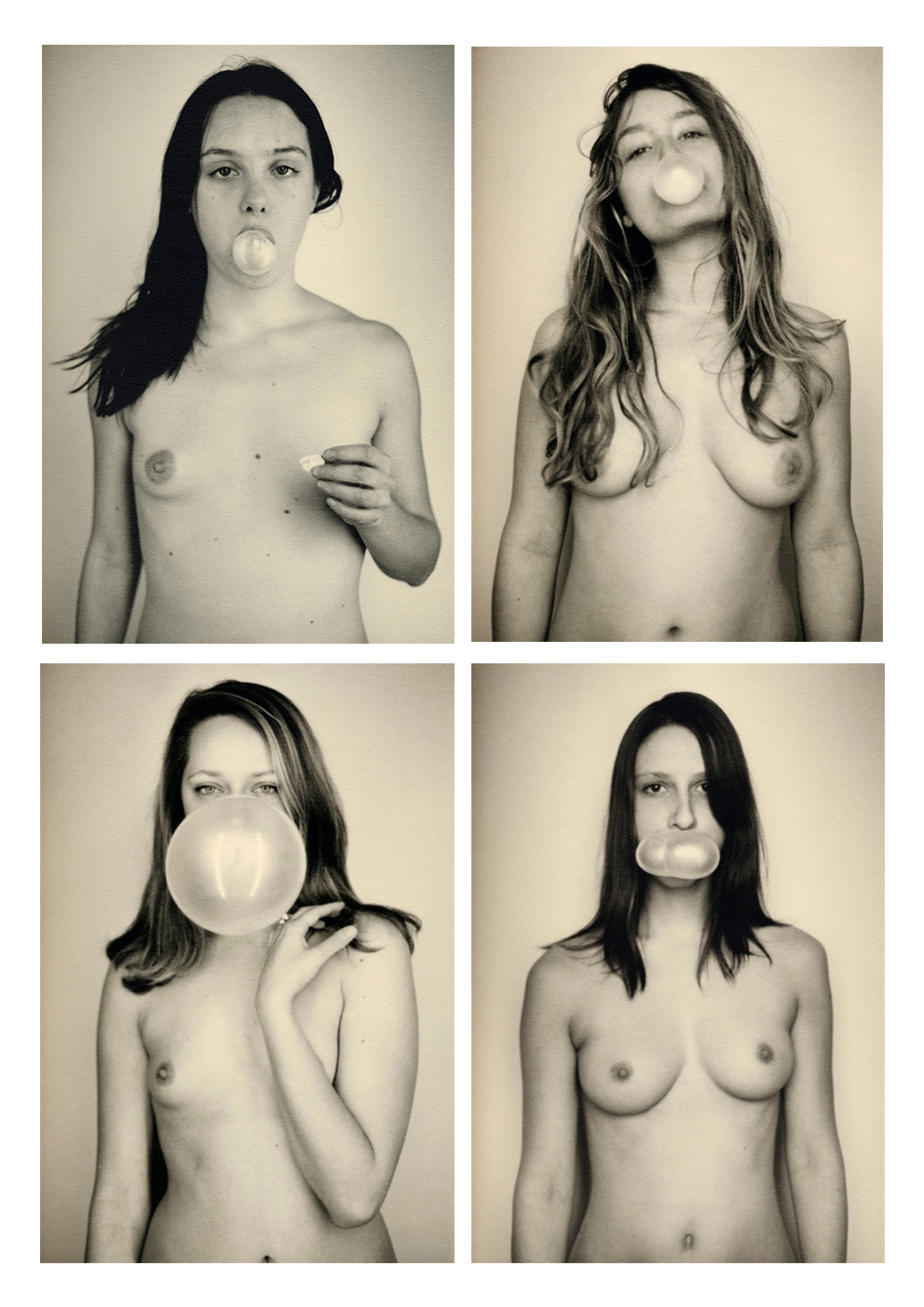 Fifty girls. Who are they exactly?
A group of revolutionaries, whose weapon would be a bubble gum bomb? The last artificial creatures of the society of spectacle ? Ego nomad zombies? Mythomaniacs pretending to be little girls, prematurely aged little girls? Are they cliché making machines, young girls searching for their identity, suicidals, or Sue Lyon’s fans?
They are about twenty years old, or a bit more. Entangled between heedlessness, dreams, social and biological constraints, they have to become adult. They step into the world.
They look for a place there. They also inhabit a new body. Not quite the adolescent one, not yet the one of a woman. New shapes they haven’t chosen.
It is at this period of my life I started to take my first pictures, self portraits. I wondered: Are we a mere succession of physical shapes? Without any real existence? An envelope, as empty as a picture from a magazine? A chewing gum bubble?
So, using a documentary approach, I turned to other girls of my age.
Did they, like me, experience all these uncertainties? Did they see life as a bad picture as well? And how
would they set themselves up inside the frame of my questioning?
I met these girls randomly. I did not choose them. Some I didn’t know called me, some others are my best friends.
Sometimes I came on to them in cafés, parties or at university. Sometimes they came to me spontaneously, as in a hurry to face the camera lens.

Without looking for each other, we eventually found each other.

The game was open to all of them, they just had to accept its rule:
You feel like bursting.
You are more than 18 and less than 30.
You’ll come to my place
Whithout any make up
You’ll pose in front of a white background
into the limits of a narrow frame
I will have defined
Once for all
You will be naked
In the most simple way as possible
You will forgive any will to match beauty clichés
While each picture is taken
You’ll look at the camera lens
You’ll blow a gum bubble
I will take a picture of you
Then,
I will show you the contact sheet and i will give you a print of the pictures.
Don’t forget, at any time, this is just a game.
This experiment won’t get anywhere unless you see it as an amusement.

Quite ironically, through this study, after spending whole afternoons discussing, after searching, organising, practising the experiment, the questions remained unsolved. Forever locked in the bubbles ?

Together we laughed. We were facing an immense question.

Will something happen some day? Or will we endlessly be stucked in this bad picture?

Will you witness their metamorphosis ? Will the bubbles cover them up completely till they disappear ? Will the girls explode when the bubbles burst?

Or will these explosions cause the end of us all?